Collaboration, unified communications and enterprise mobility are three trends which have partly powered the digital evolution, and now Microsoft has weighed in to capitalize on the buzz.

Speaking in New York, CEO Satya Nadella announced the launch of Microsoft Teams, the company’s new collaboration platform, to create a digital office allowing teams to continually communicate irrelevant of where they are in the world. With the tools available to enterprise now, not necessarily Microsoft’s offerings, a physical office is starting to become redundant.

Collaboration tools are hardly new to the world of business, however Microsoft is now incorporating numerous features from real-time chat, to Skype to its bot framework to take the tools one step further. It is a similar proposition to Workplace by Facebook, which was announced last month, both of which are aiming to capitalize on strong brand credibility to take a fast-growing subsector which already has a number of established players including Slack and Jive.

“We built Microsoft Teams because we see both tremendous opportunity and tremendous change in how people and teams get work done,” said Kirk Koenigsbauer, Corporate VP for the Office team. “Teams are now more agile and organizational structures more flat to keep communications and information flowing. With Microsoft Teams, we aspire to create a more open, digital environment that makes work visible, integrated and accessible—across the team—so everyone can stay in the know.”

Now the size of Microsoft is not a given for it to be a success in this area, but the team has also reeled out some statistics regarding the individual components of Microsoft.

Add in a real-time messaging service, the opportunity to integrate social media platforms, first- and third-party bots, what looks like an easy to use app, as well as other features, and all of a sudden you have a collaboration tool which does look pretty useful. Telecoms.com watched a live demo of the platform, and to be fair to Microsoft it does look handy as well as easy to use. With all of the features mentioned, working from home doesn’t look that complicated anymore.

Customization is an area which was emphasised throughout the announcement playing on the demands of the ever-more critical customer who isn’t satisfied with an off-the-shelf product anymore. While Microsoft various features are deeply integrated, the user can also design their own experience by way of cloud services built into tabs. It’s full of Microsoft features which will appeal to IT managers wanting to standardize an organization, but offers open integration to satisfy the fussy ones.

It seems like the real deal, which might explain why Slack, the current leader in the collaboration segment, seems to be a bit nervous about the announcement.

The Slack team has posted a patronizing blog entry entitled “Dear Microsoft”, which was also featured as a full-page advert in the New York Times. The whole point of the entry would appear to be to undermine the Microsoft launch, offering advice as to how to take on the collaboration market segment and to demonstrate it is still in charge. In your correspondent’s opinion, the move backfired and looks like a panicked move of a company which is seriously worried about one of the worlds’ largest tech companies moving into its patch. And fair enough.

Microsoft has shown to be innovative in recent years, pulled itself back into the spotlight and now controls one of the biggest databases of corporate information following its LinkedIn acquisition. Slack has every right to be nervous. 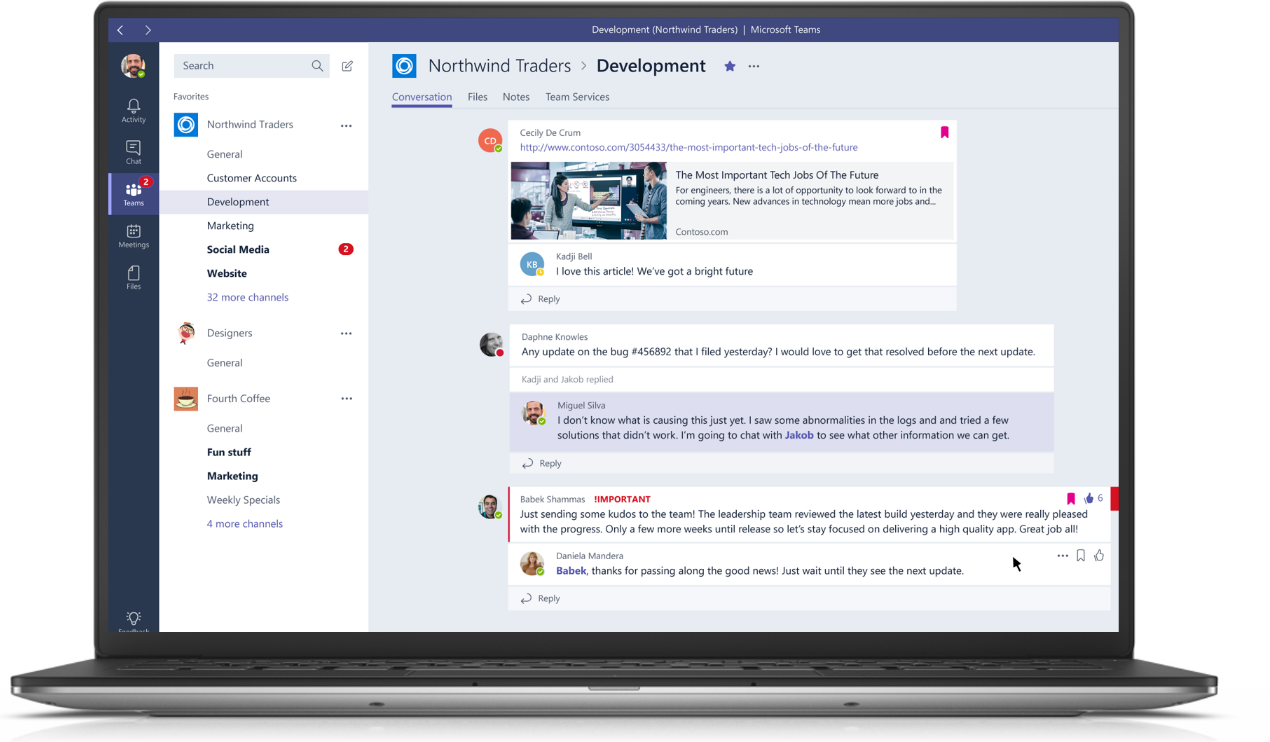