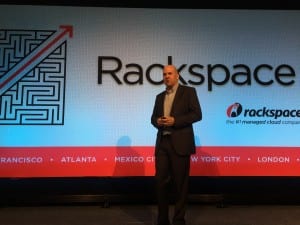 The world of cloud computing can be as cruel as it can be kind, offering opportunities for some and difficulties for others as Rackspace has found out in recent years.

Rackspace was one of the world’s more prominent technology companies prior to the cloud computing boom, commanding attractive share prices of $80 in 2012, though recent years have eroded its influence on the industry. Prior to Apollo taking the business private in August, share prices had dropped to as little as $17 as the team struggled to find its place in the digital era. According to CTO John Engates Apollo picked up a real bargain.

“One of the challenges for our company is that we weren’t a perfect fit for either the telecom or the software analyst’s coverage,” says Engates. “For the most part, businesses are either telecoms or software and we didn’t fall into either category. Sometimes those analysts would try and elbow us into a business model which they applied to existing companies they covered and we just didn’t fit.

“That’s why we sometimes disappointed. We weren’t growing like a SaaS company and we weren’t using capital and running ourselves like a telecom.”

Rackspace started life as a web hosting company, initially finding success through the ‘Fanatical Support’ offering which focused on services and support for customers, as opposed to its competitors who primarily concentrated on the technology end of hosting. It was an immense triumph, though the market began to shrink with the emergence of cloud computing on mass scale. As companies like Amazon Web Services and Microsoft created dominant positions, Rackspace struggled to establish itself in the evolving digital landscape.

The latest move for the company was towards a multi-cloud service offering which is where some of the problems have arisen. Multi-cloud is one of the buzzwords which has the weight to prove credible as opposed to a marketing phrase, but it’s still early days. This is where Apollo saw the value in Rackspace.

“In the early days we were a managed hosting company, today we’re delivering the same managed experience across multiple clouds. That includes Amazon, Azure, Openstack private cloud, on premise, and that is what Apollo got excited about.

“They have been talking to enterprise customers and other businesses which they own and they’re all struggling with digital transformation, as well as their strategy to manage the journey to the cloud.”

When cloud first started making waves in the industry the main concern was how to take traditional IT operations and move them into the digital environment. Moving from analogue to digital is complicated irrelevant as to who you are. Now cloud has truly entered mainstream the question is how do you manage multiple cloud environments simultaneously, keep an eye on costs, move data sets between different platforms and make sure the business is still making money at the same time.

At the moment it only a small number of companies who are assessing the multi-cloud conundrum, but in theory it will be every CIO on the planet. Every company is driving towards a cloud-first mentality (or at least claiming to) which creates the problem in managing cloud platforms effectively more complicated. The market for managed cloud services in a multi-cloud ecosystem is already a big one, and it’s only going to get bigger.

“We’re not just throwing a clever word at something for the sake of marketing,” says Engates. “It’s a real problem. Companies today are going on a cloud journey, sometimes by accident, sometimes by the fact that one of their business units has gone off and bought a solution and it happened to be Amazon cloud and maybe a different group has started down the azure path; you end up with multiple clouds just because that’s life.

“CIO’s are now asking questions like how do we keep pace with the innovation of each one of these platforms; how can we have in-house expertise across all these clouds; how do we take advantage of those clouds effectively; are we using Amazon appropriately; are we using Azure best practises; are we applying the right architecture; how do we manage costs; how do we know who is using what and what are they using them for; and how do we track that? So there is probably a lot of stress around the journey to multi-cloud!”

The skills gap has been a well-documented challenge in the IT industry so hiring experts for each of the cloud platforms is a tricky task. Combine that with the number of different platforms available, it becomes a very expensive and prohibitive job. For smaller companies, can they afford to have experts in AWS, IBM Softlayer, Google Cloud, Microsoft Azure, Openstack and the rest of the platforms as well?

“We have more than 400 certified AWS engineers currently. We went from zero couple of years ago to 400 today and were aiming to be amongst the top tier of Amazon certified solution providers, as well as across the other cloud providers,” says Engates.

“CIO’s are struggling to make that shift quick enough in their own IT organization; the skills they have don’t always directly apply to new cloud architecture and it’s hard to retool your IT organization. It’s difficult to find these skills but also retaining the talent. That in itself is enough of a challenge, but to top that off with cloud companies building in tons of new features every year, it really leaves your head spinning when you try to figure out how to manage that. This is where the managed multi-cloud market is emerging from.”

While Rackspace is making a jump on the multi-cloud segment, it still has some way to go before it completes its own transformation journey. That’s where Apollo comes in.

Taking Rackspace private gives the team the freedom to look more long-term. Investors in the public market are always looking much more short-term; where are the profits coming from in the next quarter? It makes the transformation much more difficult, but Apollo will be looking 2-3 years down the line allowing Engates and his team more time to crack the equation and position Rackspace in the best possible position to tackle the potential lucrative multi-cloud market.

“I was personally in front of investors and analysts quite a lot over the years and my perception was that you could never do enough right for those folks to be happy. It was never enough and there was always criticism, but that’s business and that’s the public market,” says Engates.

“They are interested in what you have done for them lately. In the private market you don’t have to think about next month or next quarter you can think about next year, or the next two years or three, because that’s what really matters to people like Apollo.

“They don’t really care what happens next quarter, they care about the end product. Can we really turn this thing into something powerful and valuable? That’s what they are excited about.”

The industry still needs to be educated on what multi-cloud is, and what the new Rackspace offering is, but with patient owners in Apollo, Engates and his team have an opportunity to take the business back to the highs of a previous era.