UK broadband advertising is ‘up to’ no good

The UK’s Advertising Standards Authority (ASA) has set the telco industry in its sights as it looks into the language used in broadband speed marketing campaigns.

The ‘up-to’ claim has been one which has plagued advertising campaigns in recent months, and to be fair it isn’t restricted to the telco industry, though we do seem to be one of the worst offenders. Following the release of ASA-commissioned research conducted by GfK it is clear there is little understanding from the consumer as to what broadband speeds actually mean and advertising language may be misleading.

“Making sure ads don’t mislead is at the heart of what we do,” said Guy Parker, the ASA’s Chief Executive. “We’ve taken action this year to tackle confusing broadband pricing, to the benefit of consumers. Our new research indicates that speed claims in ads contribute to consumers’ expectations of the broadband speeds they’ll receive, but their expectations are not being met. That needs to change.”

Most consumers understand the higher the number in the advert, the higher the speed of the service, but the number who actually know what this means and what speed they are likely to achieve on a day-to-day basis is low. 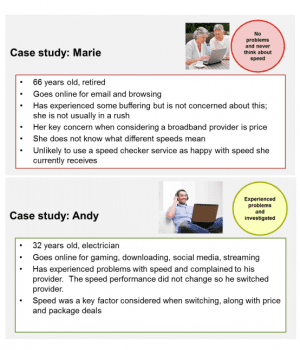 Considering how quickly internet speed is increasing and the frequency in which claims change in broadband advertising campaigns, this confusion is unsurprising. Broadband providers have done little to remove the confusion, explaining what speeds actually mean and what speeds are required to complete day-to-day tasks for example, creating a vacuum between the provider and the consumer.

The technique is somewhat similar to the trend of using ‘scientists’ in white lab coats in years gone by to validate advertising claims made by a brand. If an official looking person says a number of complicated things to you that sound very smart and beyond comprehension, it must be true.

The sheer volume of numbers which are thrown at the consumer during broadband advertising campaigns is incredible. Some sceptics would argue this is done on purpose to intentionally confuse the consumer, after-all, who wants to ask what it means and look silly? Best just to pick the biggest number and deal with the fallout later on; that’s tomorrow-me’s problem.

Current rules on advertising state a broadband provider can claim an ‘up-to’ speed should it be able to demonstrate these speeds for 10% of its customers. This remarkably low percentage has led to the confusion on what internet speeds actually are as the research highlighted few consumers know what the rules actually are. A high proportion believe speeds quoted in advertising campaigns are genuinely achievable, which for the vast majority this simply is not the case.

“The current system can leave nine in ten of us disappointed because, for an ‘up to’ speed to be advertised by a provider, that speed need only be achieved by 10% of customers,” said Ewan Taylor-Gibson, telecoms expert at uSwitch.com. “Whilst there could be ways to nationally advertise speeds that might better manage people’s expectations, what broadband users need is to be able to easily figure out what providers can actually offer at their own property.

“For now, providers only disclose their estimated average and minimum speeds once you approach them directly, which can make it unnecessarily difficult to compare options. Having the estimated speeds providers can deliver to your home displayed during the comparison process ¬– something that is not currently supported by all providers – could be an effective way to address confusion around broadband speeds.

“It would also remove the onus from consumers who currently have to contact providers individually to source the speed data for their properties.” 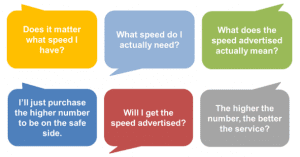 Additional research from Cable.co.uk shows the 80% of participants find current advertising campaigns to be directly misleading, and on average they believe 66% of customers should be able to receive the advertised speed as opposed to the 10% currently permitted.

“If an amount of something is explicitly offered, most of us tend to expect to get what we see regardless of accompanying caveats,” said Dan Howdle, Director of Communications at Cable.co.uk. “This psychological loophole has allowed advertisers to uniformly add the ‘up-to’ qualifier full in the knowledge that customers will commonly pay it not the least bit of notice.

“More pointedly, perhaps, the ASA study shows that most of us understand neither what a megabit is, nor how many of them we should want or need, while simultaneously demonstrating that speed plays an important factor in what we choose to buy.

“The ASA’s report is rightly damning of slippery advertising practices of an industry that has come to rely on a poor level of technical understanding among its customers, in order to repeatedly sell them more than they need, or supply them with less than they think they’re going to get.”

Part of the argument is the utilization of the internet. Telcos are keen to avoid the commoditization of the internet, and the subsequent race to the bottom, however this is the direction the industry is heading. Considering this, should telcos not be held to the same standards as other utilities providers?

“Broadband is the only type of utility contract in the UK it is possible to enter without knowing exactly what it is you’re going to get,” said Howdle. “We wouldn’t pay a fixed sum for an unknown cubic footage of natural gas, nor identical monthly instalments for a mystery number of kilowatt hours. And yet this is exactly the proposition when buying broadband up until this point.

“In terms of what this report means for future rules, as with the recent ruling on the inclusion of line rental and up-front costs in broadband advertising, big changes are almost certainly afoot.”

Advertisers may argue it is difficult to build advertising campaigns which are accurate to everyone considering the breadth of the UK; brand advertising is generic to appeal to the common denominator. However, consider the rise of cloud computing, and industry claims to be working towards more personalized advertising through advanced data analytics solutions, this shouldn’t be a complicated task.

If Facebook is aiming to deliver news content which is personalized to my age, sex, needs, mood and current location (admittedly it hasn’t nailed it yet), it shouldn’t be that difficult to build advertising campaigns which are specific to a post code in the digitally defined world. This of course would not be to the benefit of the broadband provider, except in 10% of the cases.

Meet the top executives, technologists and disrupters from across the telco industry in the #NetworkX50… twitter.com/i/web/status/1…
29/09/2022

US operator T-Mobile has launched a suite of ‘ready-to-deploy’ solutions for smart cities and businesses operating… twitter.com/i/web/status/1…
29/09/2022

Despite having months to prepare, many companies have left it to the last minute to submit their entries to the 202… twitter.com/i/web/status/1…
29/09/2022

Japanese tech giant NEC has continued its Open RAN crusade with the introduction of its open virtualized RAN softwa… twitter.com/i/web/status/1…
29/09/2022

US telco Verizon aims to capitalise on strong demand for mobile gaming and sports streaming with a host of new prod… twitter.com/i/web/status/1…
29/09/2022

Ofcom is having its say on the cost of living crisis in the UK, urging telcos to push low-income plans and appealin… twitter.com/i/web/status/1…
29/09/2022