LG has unveiled the figures for the quarter ending December 31, which begged the question: why is the team bothering with its mobile division?

The team reported healthy revenues of $12.79 billion for the quarter, which was in fact a year-on-year increase of 1.5%, however this has resulted in a loss of just over $30 million. Although this isn’t necessarily a catastrophic loss for the business, it’s a reflection on the success of the last twelve months following 2015’s profitable Q4. The blame lies quite clearly within one division; Mobile Communications.

Overall, the unit brought in $2.51 billion which was in fact a 23% year-on-year decline, but this was at a loss of $401 million, essentially wiping out any profits LG could muster in other areas.

The team claims to have shipped 14.1 million units across Q4, a decline of 8% year-on-year, though shipments to North America did increase by 15% in a rare glimpse of sunshine for the division. “Loss continued due to weak sales of G5, marketing expense for V20, and expenses associated with finalizing the business structure improvement activities,” the company said in a statement.

The blame here has to lie with the G5, which is considered to be a flop. The flagship model was launched at Mobile World Congress last year amid much fanfare, and research claimed LG was mentioned in 11% of all twitter posts and engagements. The LG G5 was in fact mentioned just 864 times less than the Samsung S7 on twitter, but it just goes to show that Twitter is not an effective measure of success.

Although the Grim Reaper is lurking in the corridors outside the mobile division’s offices, the team are defiant. 2017’s objectives for the division are to “recover premium position in 2017 by launching successful flagship model. Create Mega hit model in mass-tier zone to proceed profitable growth. Strengthen the basic performance, quality and safety of the product in order to enhance customer’s credibility and satisfaction”. 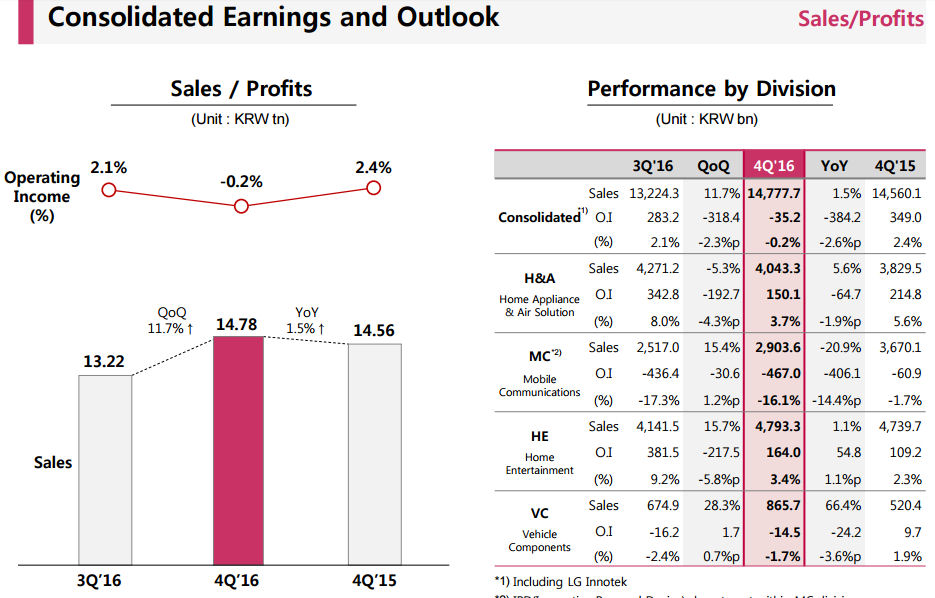