The latest research from Counterpoint on the Chinese smartphone market shows the extent of Oppo’s remarkable rise from minnow to big fish.

The whole market managed relatively healthy growth of 12% in Q4 2016 and 6% for the full year, a decent effort considering the stagnant nature of the global market. Among the vendors the Chinese market seems especially volatile, with little apparent brand loyalty, and the current leader of the pack is Oppo.

“The final quarter of the year was marked with series of flagship upgrades from key brands such as Apple, Oppo, Huawei, Xiaomi which catalyzed the smartphone demand in China, healthier than last year,” said James Yan of Counterpoint. “Chinese e-commerce players such as Alibaba also helped drive the momentum with 11.11 sale during the quarter which broke all the records compared to last year.

“Only five brands registered healthy growth during the full year 2016. Oppo, Huawei, vivo, Meizu and Gionee drove the majority of the volume, capturing a combined 58% of the total Chinese smartphone market in 2016. Demand for rest of the brands declined, especially last year’s star performers Xiaomi and Apple with lower-than-expected demand for their smartphones during the year.”

The most successful companies in the Chinese market at a given moment seem simply to be the ones with the most aggressive business strategies, including pricing, marketing and distribution. “Huawei was the leading vendor for the full year with strong demand not only for its affordable Honor branded smartphones but also healthy demand for flagship P and Mate series,” said Tarun Pathak of Counterpoint. “Huawei has gained a foothold in the premium market with the successful release of P9 and Mate 8 and will continue to put more emphasis in the premium market going forward challenging Apple. In 2017, we expect Huawei to bear the fruit of its offline channel expansion strategy started in late 2015 to cover 1,000 provinces by the end of the year.

“Oppo & vivo were the fastest growing brand and since June 2016 we have seen phenomenal growth for both the brands owing to strong omnipresent distribution channels from tier-1 to tier-4 cities across China, aggressive ATL and BTL marketing, effective retail-level promotions for both trade and consumers and effective positioning with focus on key features such as camera, battery life and audio within their smartphones. Though, Oppo has been leading the quarterly rankings ahead of rival Huawei in the second half of 2016.”

A lot of the specific models sold in China won’t be familiar to most western consumers and the unimaginative, numerical nature of most product names betrays how commoditized the smartphone market has become.

“More than 500 smartphone models were active during the year contributing meaningfully to the overall volumes,” said Neil Shah of Counterpoint. “However, only the top 20 models contributed to roughly a third of the total market share. While the smartphone user base is at an all-time-high and maturing, still bulk of the popular models are still skewed towards the mid-end which puts a cap on growth for players such as Apple.

“Looking at the OEMs’ overall rankings, there is no surprise that Oppo, Huawei, vivo and Apple dominate the best seller rankings. The Oppo R9 rose to the best-selling smartphone in China in 2016, breaking Apple’s iPhone dominance streak as the best-seller for the first time since 2012.

For every winner there has to be a loser and the ascendance of Oppo, Vivo, etc seems to have been at the expense of Lenovo, Coolpad and Xiaomi. Here are a few tables illustrating all that lovely data. 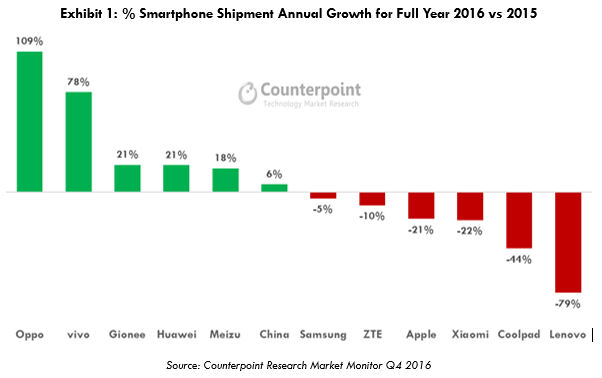 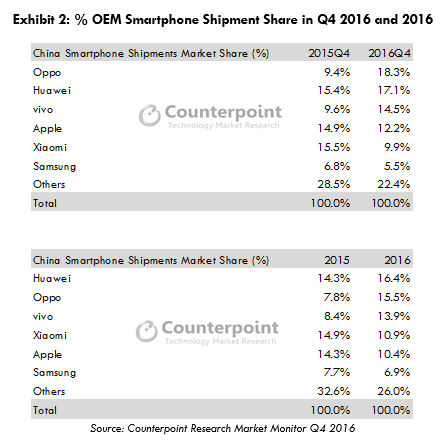 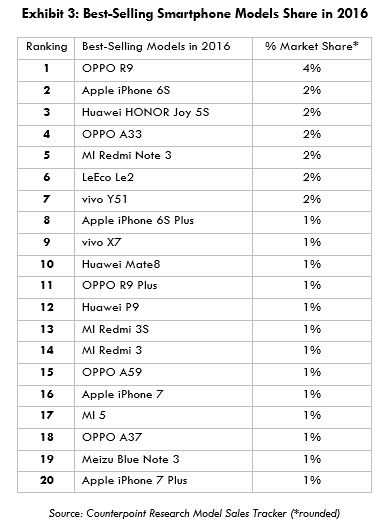